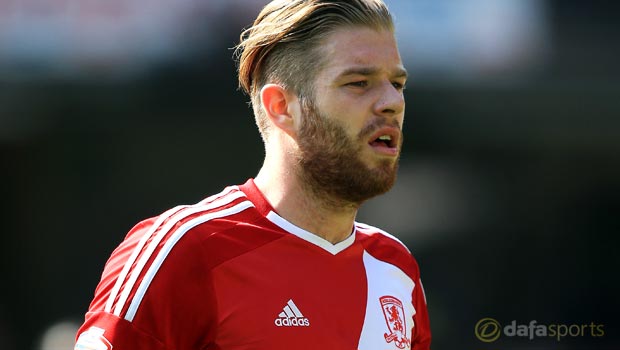 Middlesbrough midfielder Adam Clayton has urged his team-mates to stay calm and not get over-excited in Monday’s Championship play-off final against Norwich.

Boro go into the Wembley showdown as slight underdogs against the Canaries, who finished one point and one position higher in the table at the end of the season.

The match is said to be worth £120million and could see Boro return to the Premier League for the first time since 2009, while Norwich are hoping for promotion at the first time of asking after being relegated last season.

Norwich are also seeking revenge after losing 1-0 at home to Boro last month, as well as suffering a 4-0 drubbing at the Riverside earlier in the campaign, but Clayton has warned his team-mates they must not get drawn into the talk or get overwhelmed by the occasion.

“We had a meeting in Marbella about that sort of thing and it relaxed everyone, and we saw how we performed in two massive games (against Brentford),” the midfielder told Gazette Live. “Hopefully we can take that approach again.

“Maybe on their part there’s a bit extra (pressure to win).

“I heard Cameron Jerome say it’s about ‘revenge’ but not for us. We’ve got one aim – to be in the Premier League, and Norwich are in the way.

“Norwich were a Premier League team last season so it’ll be tough, but we have to go with our own gameplan.”

Boro beat Brentford 5-1 on aggregate to reach the final but will have to buck the trend to reach the top flight having failed to win in four appearances at Wembley.

However they have a good recent record against Norwich, having lost just one of the last 12 meetings between the sides.