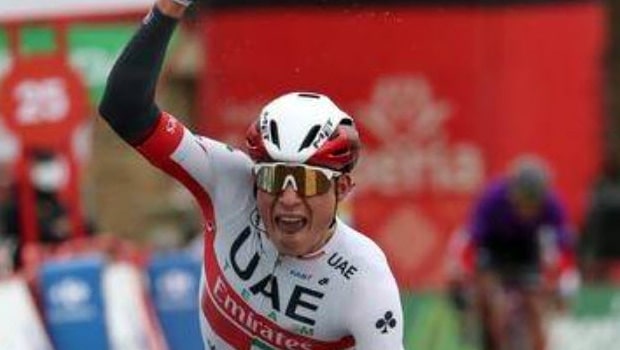 Jasper Philipsen (UAE Team Emirates) finished first on Thursday to win stage 15 of the Vuelta a Espana. The stage was quite as challenging as it was long, spanning 230km, and it had an uphill finish, with several climbs in between. Philipsen gathered momentum in the final 150m and raced past Pascal Ackerman (Bora-Hansgrohe) and Jannik Steimle (Deceuninck – Quick-Step), who came second and third respectively.

The stage began at a very fast pace as the riders were looking for a breakaway. Eventually, a 13-man break was achieved after 2 hours of riding. Some of the riders in the breakaway group included Mark Donovan and Rob Power (Team Sunweb), Luis León Sánchez, and Alex Aranburu (Astana Pro Team), Nick Schultz and Robert Stannard (Mitchelton-Scott), Tim Wellens (Lotto-Soudal),  and Jonathan Lastra (Caja Rural-Seguros RGA). Wellens, who won stage 14, later dropped back to the main grip. Rain and fog affected things in the final 40km as the peloton caught up with the breakaway riders.

More and more riders continued to drop from the break as the race was nearing its end. Up until the final 100m, no one could have seen Philipsen winning the race. But with 80m left, Philipsen hurried past Ackerman and Michael Mørkøv, who was in the lead at that time. Mørkøv later finished at third place.

Speaking after the race, the delighted 22-year old, expressed joy at winning his first Grand tour stage finish; “That’s amazing. I can’t describe how happy I am with this victory. That means a lot for me. I’ve been waiting for the right moment since the start of La Vuelta and today it came. They can’t take this victory away from me, so I’ll enjoy this moment, try to finish my first Grand Tour now and I’m super proud of this.”

The race officials announced, towards the end of the race, that rankings for the general classification would start in the final 3km. Due to that fact, Primoz Roglic ( Jumbo-Visma) still leads the tour with Richard Carapaz (Ineos Grenadiers) coming in second place while Hugh Carthy (EF Pro Cycling) maintains the third position.