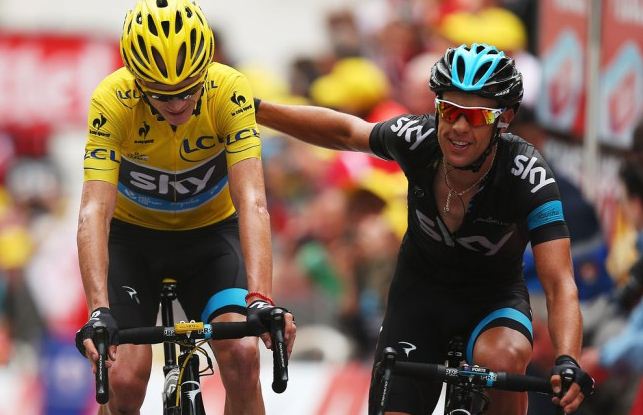 Chris Froome was hit with a 20 second penalty during stage 18 of the Tour de France but still managed to extend his lead by 37 seconds.

Froome was struggling during the second climb of Alpe d’Huez and team-mate Richie Porte was forced to drop back and get him an energy bar from the Team Sky car.

It is against the rules to take on fuel in the last 5km of a stage, something Sky would have been well aware of, but with Froome struggling, they were left with no choice.

It may have been Porte that broke the rules but the race officials also decided to hit Froome with a time penalty.

Despite his struggles, Froome still managed to finish 57 seconds ahead of Alberto Contador in second, and even with the penalty he extended his overall lead to five minutes 11 seconds.

“It was a difficult stage,” Froome said. “When I signalled for help, I needed sugar and I was thankful that Richie was there.”

Froome is facing another tough day in the saddle during Friday’s stage as riders have to conquer four more tough climbs which will include the Col du Glandon and Col de la Madeleine.

The route stretches 204km (129 miles) from Le Bourg-d’Oisans to Le Grand-Bornand and Froome believes it will possibly be the toughest day of the tour.

Meanwhile, Christophe Riblon became the first Frenchman to win a stage in this year’s Tour when he closed down a tired Tejay van Garderen just 2km from the finish.

Colombia’s Nairo Quintana was also a big winner as he broke away from Froome to cement his place in third just 21 seconds behind Contador in the General Classification standings.