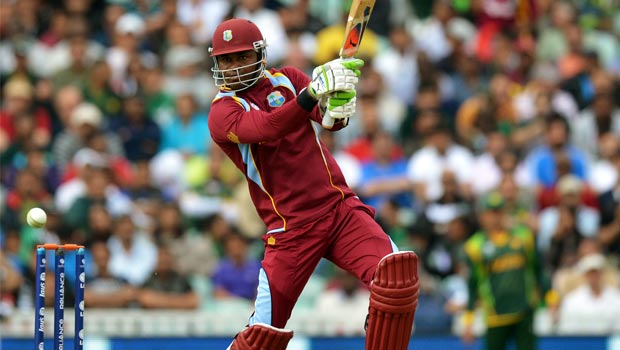 Marlon Samuels was the star as his knock of 69 runs off just 46 balls helped West Indies to a 27-run victory over England in the first T20 in Barbados on Sunday.

Samuels was in imperious form with the bat as he knocked England’s bowlers all over the Kensington Oval, as did opener Chris Gayle earlier with a score of 43. Gayle had suffered a back problem that saw him miss the one-day series, but he was back with a bang, striking five fours and two sixes before being given out lbw to the bowling of Treadwell.

West Indies ended their innings on 170-3, and in reply England could muster just 143-9 off their 20 overs, with only Tim Bresnan offering any resistance as he made 47 not out off 29 deliveries.

Spinner Samuel Badree celebrated his 33rd birthday by taking 3-17 off four overs, and England will rue the fact that they did not take more spinners with them on tour. Badree himself, meanwhile, limped off and may be doubtful for final two T20 encounters.

Samuels stole the show, though, with his batting, and he said: “I’ve been working hard, but the hard work is paying off.

“I love to play cricket in Barbados, the pitch was one you could play your shots on, so we had to back ourselves.”

England captain Stuart Broad laboured with a knee injury and will now miss this week’s remaining two tests on Tuesday and Thursday.

“We didn’t get going today, but that can happen in T20 when you a chasing a good score,” he said.

“I’ve got a touch of patellar tendonitis and will not play the next two games to get ready for the World T20.”

The fifth Twenty20 World Cup, starts in Bangladesh later this month, and will see West Indies begin the defence of the title they won in 2012, while England will bid to regain the trophy after beating Australia in the Final in Barbados four years ago.