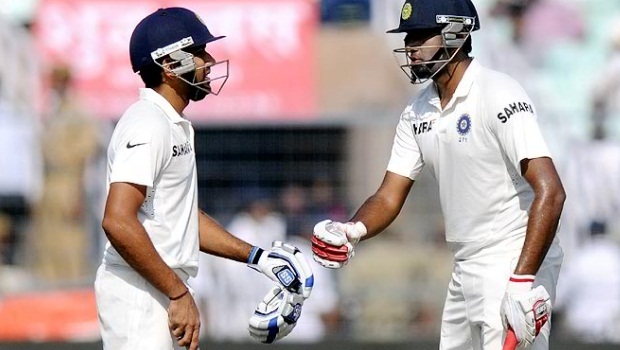 Mohammed Shami claimed nine wickets on his debut as India thrashed West Indies by an innings and 51 runs in the first Test in Kolkata.

Having dismissed Darren Sammy’s men for 234 in their first innings, the Asians moved on to 354-6 at stumps on day two, with Rohit Sharma unbeaten on 127 and Ravi Ashwin 92 not out.

And both players added to their total on day three, with Rohit finally falling for 177 and Ashwin (124) making his second Test century before becoming one of Shane Shillingford’s six victims.

India were eventually all out for 453, with Rohit and Ashwin adding 260 for the sixth wicket, and it was then the turn of the bowlers to turn the screw.

Windies’ opener Chris Gayle began in Twenty20 mode and had scored all of his side’s 33 runs when he fell to Bhuvneshwar Kumar, while Kieran Powell was far more circumspect in compiling 36 from 83 balls.

Darren Bravo made 37 and Shivnarine Chanderpaul finished unbeaten on 31 but the rest of the tourists’ batsmen fell like the proverbial pack of cards.

Right-arm seamer Shami had done most of the damage in the first innings with 4-71 and he completed a memorable debut with 5-47 second time around as the West Indies were shot out for just 168.

Ashwin claimed three more scalps to make it five for the match and, having also reached three figures with the bat, was in contention for the man of the match award.

But that went to Rohit and the players will now all head to Mumbai for the second and final Test which will bring down the curtain on Sachin Tendulkar’s amazing career.