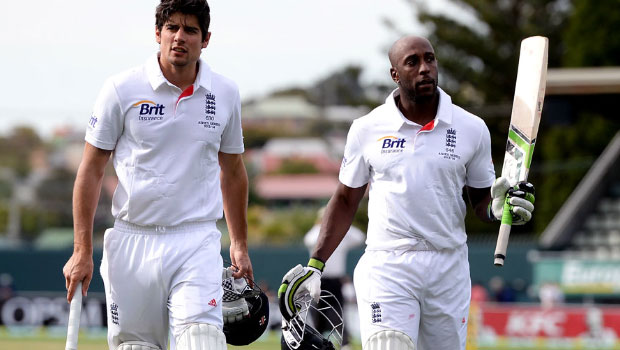 Openers Alastair Cook and Michael Carberry both scored unbeaten centuries as England dominated the first day of their clash with Australia A in Tasmania to finish on 318-0.

The selectors showed their hand early by sending Carberry in at the top of the order and the Hampshire man has now cemented his place in the team for the first Test with an unbeaten 153 in Hobart.

Cook was equally as dominant and batted throughout the day to finish 154 not out at stumps and put down a real marker for the upcoming five-Test series.

The pair were watchful in the first session, with the new ball offering assistance to the Aussie second-string quicks, and they reached 91-0 at lunch, but Carberry in particular picked up the scoring rate over the next two sessions with 22 fours and two sixes in his 288-ball knock.

Cook found the boundary on 19 occasions and he and his partner became the first England pair to bat through an entire day’s play since 1998.

The choice to open with Carberry means that Joe Root is likely to bat at number six in the first Test despite partnering Cook in last summer’s 3-0 Ashes triumph in England.

The home side’s bowlers toiled all day at the Blundstone Arena but did not enhance their prospects of a call-up to the main squad, with Ben Cutting returning figures of 0-56 from 21 overs and Trent Copeland conceding 68 from 25 overs.

If the seamers were able to maintain some measure of control during the day for skipper Moises Henriques, then the spinners were disappointing, as Jon Holland was taken for 66 runs from his 12 overs and Glenn Maxwell conceded 80 runs from 24 overs of off-spin.

It was the perfect day for the tourists who will hope that the rest of the batting line-up get some valuable time at the crease on day two.