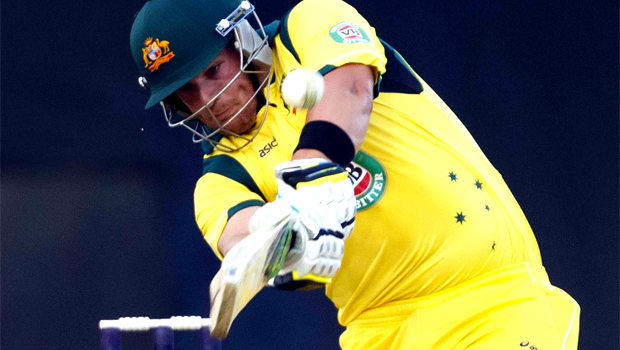 Australia’s Aaron Finch hit a world record 156 from just 63 balls to help his side claim victory by 39 runs against England in first of their two Twenty20 internationals.

The Baggy Greens were keen to try and put the disastrous Ashes series behind them and they took to the pitch at the Ageas Bowl aiming to set a competitive total with the bat.

Finch opened the batting an immediately went to work pulling the first delivery he faced from Steven Finn to the leg-side for six.

The 26-year-old proceeded to rip into the bowling line-up and ended with 14 sixes and 11 fours to his name. Shane Watson added to the tally with 37 from 16 balls as the tourists set a challenging total 248-6 – the second highest T20 international score.

Joe Root tried to mount a response for England, knocking 90 not out off 49 deliveries, but his side could only reach 209-6 form their 20 overs, handing Australia their first win over the hosts this summer and their first win in 200 days.

Captain Stuart Broad conceded a deserved defeat and could only praise the performance from the Australians, saying: “Sometimes you have to hold your hands up.

“It was a magnificent knock by Finch and he won the game for Australia.

“It was incredible striking and to hit 14 sixes in an innings is pretty special. It was amazing to watch but unpleasant to bowl at.

“The crowd will go home happy having seen 460 runs off 40 overs, but there are 11 disappointed Englishmen, that’s for sure.”

The two sides will now head to Durham for the second T20 international on Saturday.