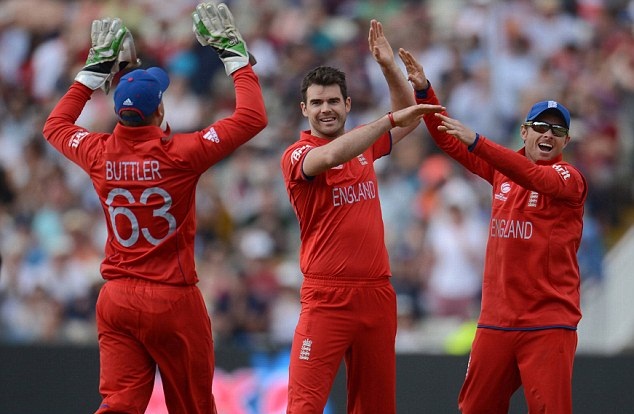 England saw off the Aussies by 48 runs in their opening Group A match in the tournament at Edgbaston, with Anderson and fellow frontline bowler Stuart Broad again starring with the ball.

The pair took four wickets between them, with Broad making the early breakthrough to see off David Warner, before record-breaker Anderson chipped in with three.

Afterwards Cook admitted the duo had again been a formidable attack.

He said: “Jimmy and Broady were exceptional in the first 10 overs. Jimmy is a great bowler. “He just keeps getting better and better and we are lucky to have him.”

Anderson moved ahead of Darren Gough with 235 wickets when he claimed the scalp of Mitchell Marsh as England always held the upper hand in the first of many summer clashes against their familiar foes.

Ian Bell struck a man-of-the-match score of 91 to help the home side, who had won the toss, to 269-6 off their 50 overs. The score looked slightly below par on a good batting pitch but, thanks largely to fine restrictive bowling from Anderson, Broad and James Tredwell, Australia never got near their target, limping to just 221-9 in reply.

Bell’s batting display was key but he, too, admitted the performance from England’s bowlers was vital in delivering the desired winning start to the competition.

“Jimmy was outstanding and it was great for us to be able to celebrate him becoming the leading wicket-taker as well,” said Bell. “It’s been a massive day for him.

“The best time to bat on that wicket was with the hard new ball – and the way Jimmy and Broady set the tone was very important for us in the first 10 overs. All of our seamers were fantastic.”

England now face Sri Lanka next in the group, with many expecting them to offer a stiffer one-day test than a clearly weak Australian side did.