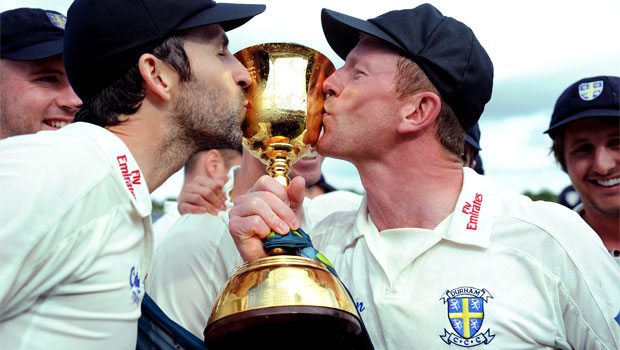 Paul Collingwood says he wants one more crack at silverware with Durham and is then likely to retire at the end of the season.

Collingwood captained Durham to the County Championship title this year and he is targeting even more glory with them before finally calling it a day.

“I am enjoying myself, I have one year left on my contract and I would have thought that would be it after that,” he told the ECB website.

Collingwood had also won County Championships in 2008 and 2009 but he was away with England most of the time back then and says this one is even sweeter.

“It was, yeah. Obviously being captain and having so many home-grown players, too, was great,” he said.

“I know every team tells you when you’re winning that there is good camaraderie and all that sort of stuff, but there was a real cohesion in the team.

“We went through some hard times and adversity with Geoff Cook’s illness (the Director of Cricket suffered a heart attack). Every single game we seemed to have an injury or lose a player.

“There was a long list of things throughout the season that just seemed to gel the team more together really.”

Collingwood has just been added to Scotland’s coaching staff and will spend the winter working with them, something which could come in handy as he works out what to do next.

“I have enjoyed the TV stuff more than I thought I would,” he added. “I quite enjoy providing in-depth analysis.

“Coaching is always the role I have always fancied but you have got to experience it, which is why I am doing this job (with Scotland) through the winter.”