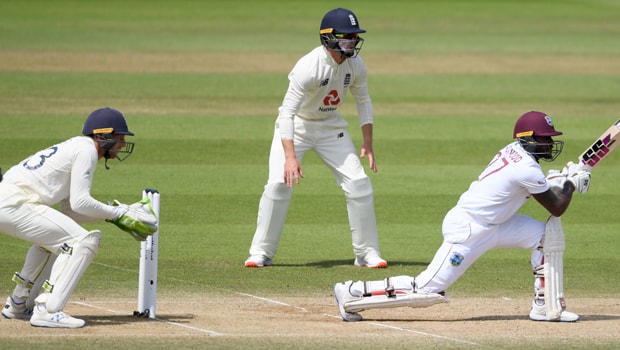 West Indies defeated England by four wickets, as Jermaine Blackwood was instrumental to West Indies’ second innings as they chased down 200 to claim a crucial win in the series.

Jermaine Blackwood’s unyielding 95-run knock was what enabled West Indies to come back from 27 for 3 and chase down 200 with four wickets remaining in the first Test match against England in Southampton.

This was the West Indies’ most important victory in England since the 1980s heyday. This was also the second time since 2000 that West Indies have won a Test on English soil.

It was an excellent, professional, and clinical performance by the West Indies as they finished off of England by four wickets. The victory came as a surprise because the West Indies team are not known for winning away from home in any situation.

In the game, the visitors needed to score 200 in the fourth innings on Day 5 to win, especially after their top order was eliminated by Jofra Archer.

Nonetheless, they began their chase and reached the Lunch break at 35/3, with opener John Campbell having retired hurt. However, Roston Chase and Jermaine Blackwood gave them a bright start to the afternoon session.

Jermaine Blackwood reached his half-century towards the end of the second session. He led the chase bravely up until the last hour of play, before falling for 95. Jason Holder and John Campbell, batting with an injured toe, helped the team to win with four wickets left in the last hour of play.

On Saturday, England was bowled out for 313 in the first half-hour of Day 5, after Shannon Gabriel completed a five-wicket haul for the innings. Archer to counter the comeback of the West Indies. The six wickets England got were due to work done by Jofra Archer and a three for 45 that threatened to turn the match.

The game gradually went on in favor of the visitors. However, it was Jermaine Blackwood who would seal victory with great innings.

In the end, both sides deserve credit for putting up a great game and making the game worthwhile for cricket fans worldwide.