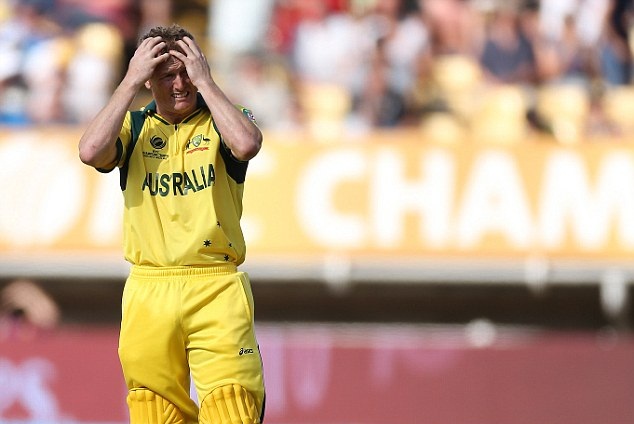 Australia captain George Bailey has called on his side’s batsmen to step up their game in ICC Champions Trophy.

Australia captain George Bailey has called on his side’s batsmen to step up their game after a disappointing performance in the ICC Champions Trophy opener against England on Saturday.

The Aussies were well beaten in the end at Edgbaston, losing by 48 runs to a dominant England side, after the Baggy Greens? leading batsmen failed to deliver in their 50 overs.

England had posted 269 – a score that looked attainable on a decent pitch – but Australia fell way short in their reply, managing just

Bailey admitted afterwards that his side must improve if they are to make an impact in the tournament, while everyone associated with Australia will be hoping they can offer much more with a big Ashes summer ahead.

Bailey, whose top-score of 55 was a creditable effort, lacked support from others and only a 54no off 42 balls by all-rounder James Faulkner came close to his knock.

The skipper admitted Australia’s batting must improve, saying: “From around 170 for one with about 15, 16 overs to go I think we did a really good job to pull it back, it looked a fantastic batting wicket.

“I think the scoreline at the end probably flattered us a little bit but it was really the batting that let us down.”

The poor display followed on from Tuesday’s desperate innings against India when Australia were bowled out for just 65 and Bailey admits they have to do better when they meet New Zealand in their next Group A game on Wednesday.

He added: “It doesn’t look great but I think it’s only really a small thing, only a bit of confidence and one partnership at the top order scoring us some runs.”