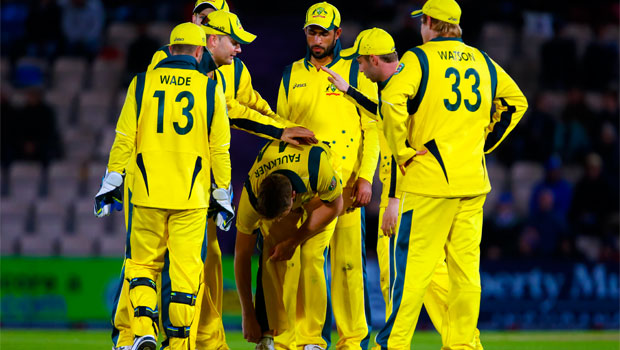 James Faulkner proved to be the star turn as he guided Australia to victory in India, hitting 64 off 29 balls as the tourists took a 2-1 lead in the ODI Series.

Australia successfully chased down India’s target of 304 with four wickets and three balls remaining and in doing so, they recorded their highest successful run chase in India.

The victory is the perfect response for Australia following Wednesday’s action, when India successfully mounted the second-highest run chase of all time to draw the series level with a nine-wicket win in Jaipur.

Faulkner’s rapid-fire innings was the catalyst to the success, with the Tasmanian all-rounder hitting 30 runs from the 48th over, a new Australian one-day international record, smashing four sixes off Ishant Sharma’s bowling in the process.

He also hit the winning runs – his sixth six of the game proving enough after Australia needed to score nine from the final over.

India had set a formidable total, largely through the batting of MS Dhoni, who scored 139 not out. George Bailey dropped a catch in the penultimate over and Australia were made to pay for this mistake, with Dhoni scoring another 34 from the final 11 deliveries he faced.

In reply, Bailey scored 43 for Australia, with Adam Voges contributing an unbeaten 76. Aaron Finch and Phil Hughes had enjoyed an opening stand of over 50 runs, but Australia soon slumped to 88-3, with Bailey and Voges’ combined partnership of 83 rescuing the match for the tourists.

The fourth match of the series takes place in Ranchi on Wednesday.