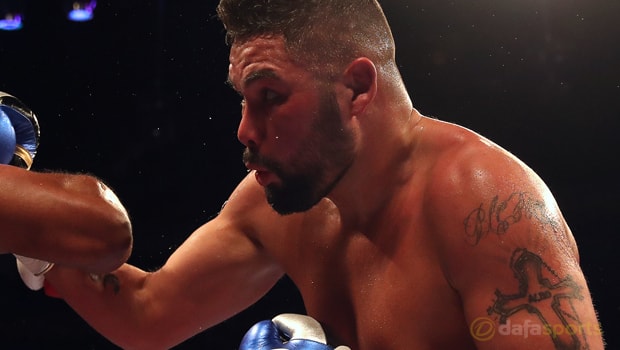 Tony Bellew has continued to bait Tyson Fury and insists his fellow Briton is not ready to step into a ring with him.

The Merseyside fighter made a successful step up to the heavyweight division in March 2017 when he beat a wounded David Haye at London’s O2 Arena.

Bellew proved his victory was no fluke by beating Haye for a second time in May and he has since set his sights on Fury.

However, Fury has played down any suggestions that they could go toe-to-toe at some point in the near future.

Fury made his much anticipated return to the ring against Sefer Seferi earlier this month, making easy work of the Albanian, as he looks to get himself back in the mix for a world title.

The former world heavyweight champion has called out current belt holders Anthony Joshua and Deontay Wilder but he is set for a few more warm-up fights before he is ready to seriously challenge.

His promoter Frank Warren has already confirmed he will fight at Windsor Park on August 18, although he opponent is yet to be confirmed.

Bellew looks unlikely to be lining up in front of the Gypsy King but he insists he would make easy work of him if the opportunity arises.

“I would love it,” Bellew told Sky Sports.

“People tell me that he said I’m too small, yet he gets in with a guy three inches smaller than me, and about a stone lighter.

“I’m not too sure what he actually means when he says too small. Right now, I’ll be honest, Tyson Fury isn’t really ready for me.

I would stop Tyson Fury quicker than I stopped David Haye. There’s no two ways about it.”