Posted by Vincent Henderson on December 27, 2016 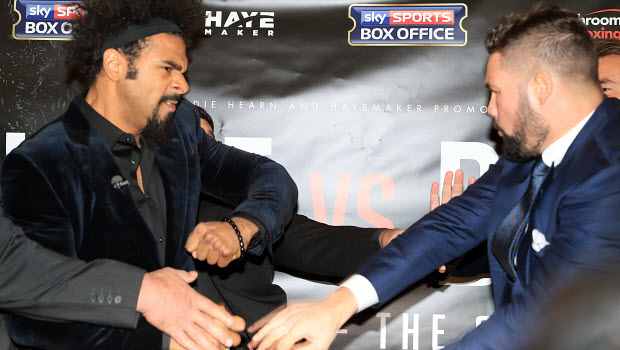 Tony Bellew believes David Haye will “quit” if their fight on March 4 goes beyond four rounds.

The two British fighters are set to go head-to-head at London’s O2 Arena early next year, with WBC cruiserweight champion Bellew making the step up to the heavyweight division for the bout.

The Liverpudlian has questioned Haye’s desire to go the distance during the fight, revealing that he expects the former two-weight world champion to throw in the towel if the bout goes past four rounds.

“What I will tell you is, if this fight goes past four rounds, he’s going to quit,” Bellew said.

“At some stage, it will get too hard and he will quit. He hasn’t got the fight in him anymore.”

Despite his confidence, Bellew still has a lot of respect for Haye, describing his rival as possibly the “most dangerous” fighter in the division.

“He’s the best heavyweight in the world outside of the champions,” Bellew added. “There is no debating that whatsoever.

“He’s possibly the most dangerous heavyweight in the world, including the champions. What does he do very well? He has got a massive right hand.

His technique’s not the best but his fantastic athleticism allows him to make up for that.”

Bellew, who has won 28 of his 31 professional bouts, is available at 5.50 to secure another victory on March 4 while Haye is priced at 1.15.