Posted by Vincent Henderson on November 11, 2018 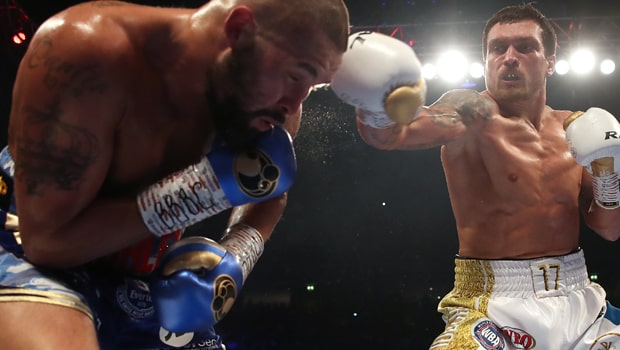 Tony Bellew has confirmed his retirement from boxing after admitting he was beaten by an ‘amazing fighter’ following his knockout loss to Oleksandr Usyk in Manchester on Saturday.

Bellew was attempting to become the first man to beat Usyk and become the undisputed cruiserweight world champion in the process, but despite being ahead on two out of three scorecards, he suffered a knockout blow during the eighth round that he could not recover from.

The Liverpudlian, who won the WBC cruiserweight title at Goodison Park two years ago before twice beating David Haye in two heavyweight contests, was clearly emotional after his defeat and was quick to confirm his retirement from boxing.

“It’s definitely over, you’ll not see me in a ring again,” Bellew told reporters.

“Now I just want to be normal, so please leave me alone.”

The 35-year-old was also magnanimous in defeat, admitting he was beaten by a better fighter and went on to describe Usyk as the ‘greatest man’ he has ever shared a ring with.

When asked about Usyk, Bellew said: “He’s an exceptional fighter who deserves all the awards in the world.

I lost to one of the pound-for-pound best. “I have no excuses. He is an amazing fighter. He is the greatest man I have ever shared a ring with. I wish [him] greatness.

“I’m a world class fighter. But that was the difference between world class and elite level.”

Usyk has now won all 16 of his professional fights, with 12 of those triumphs coming via knockout, while he not only holds all the belts in the cruiserweight division, but he is also a former Olympic champion.

The 31-year-old could now follow in Bellew’s footsteps by making the step up to the heavyweight division.