Boxing: ‘Pacquiao-Mayweather should have happened years ago’ – Freddie Roach 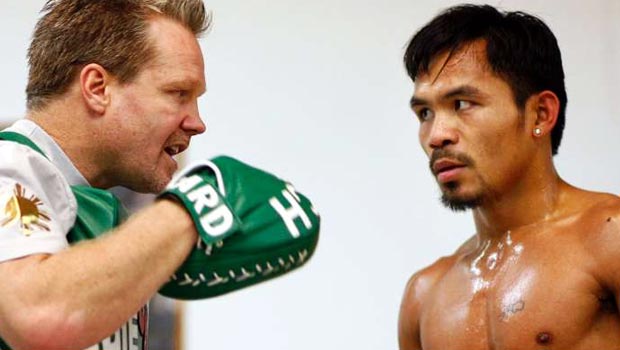 Manny Pacquiao’s trainer Freddie Roach has claimed that Floyd Mayweather will never fight the Filipino as he doesn’t want to risk his undefeated streak.

Pacquiao is scheduled to fight Timothy Bradley on Saturday evening in what is the second duel between the pair and is the clear favourite to win the welterweight fight.

The Filipino star is priced at 1.44 to emerge victorious in Las Vegas while Bradley, who was subjected to abuse following his controversial points-decision victory last time the two met, is priced as the underdog at 2.85.

The build up has been dominated by talk of a potential bout between Pacquiao and Mayweather once their respective fights are over, with Mayweather fighting Marcos Maidana on May 3.

Pacquiao’s trainer, Roach, has since moved to quell any rumours of a potential meeting between the two stars, as he believes the fight may be too much of a risk to Mayweather.

Roach said: “It looked close two years ago but I don’t think Floyd will take the chance now. Floyd’s main concern has become keeping that 0 (for zero losses) on his record. I don’t see him taking any real risk of losing that before the end of next year, when he says he’s retiring.

“It’s not that he’s afraid of Manny. No fighters are scared of anybody in the world.

It’s just that he believes if he goes out undefeated he will be seen as better than greats like Sugar Ray Robinson, who had losses on his records.

“Down the years, no matter what the issues, if two fighters really want to fight each other they make it happen.

Manny will fight anyone but Floyd is two years older and thinking about that record of his,” Roach added.