Posted by Vincent Henderson on November 25, 2013 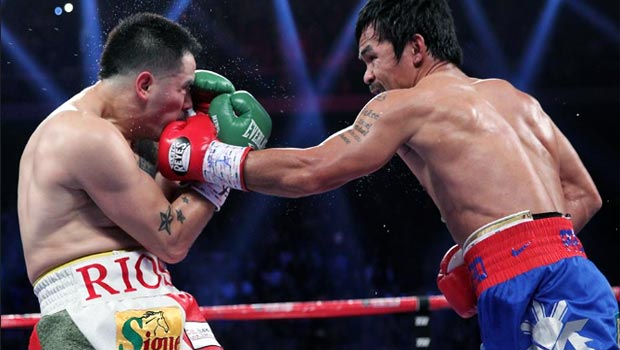 Manny Pacquiao has targeted a showdown with Floyd Mayweather following his victory over Brandon Rios on Saturday.

Pacquiao took the WBO international welterweight title with his first victory in two years and has now set his sights on Mayweather.

However, the man from the Philippines says it is down to the American to decide when it happens after promotional disputes and other issues have so far prevented a fight from happening.

“My job is to fight,” Pacquiao said after his win in Macau. “I am willing to fight Floyd. So it’s up to him.”

Pacquiao is now due to fight in America on April 12 and his promoter Bob Arum is hopeful that Mayweather will be his opponent.

“It’s a fight that should happen – and where there’s a will, there is a way,” Arum said.

Despite Pacquiao and Arum pushing for a fight with Mayweather, trainer Freddie Roach says he would prefer a re-match with Juan Manuel Marquez, who beat the Filipino last year.

However, Roach does believe that his man could have the beating of Mayweather if a fight did go ahead.

“Mayweather doesn’t fight southpaws too well. And he has trouble with speed,” he said.

“He (Pacquiao) knows the biggest thing he can do for his people is to win fights and look good. And that’s what he did.

“Marquez is the one fight I want. I’d like to shut him up.”