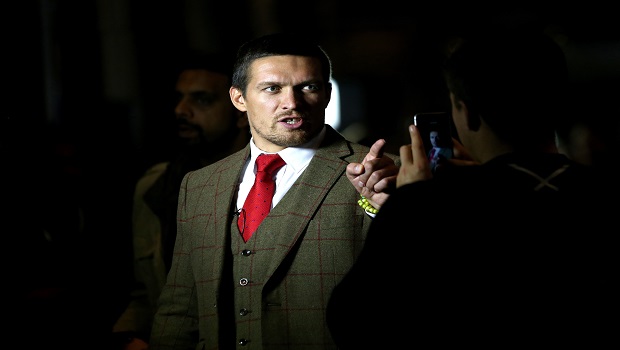 Cruiserweight king Oleksandr Usyk has indicated he is keen to step up to heavyweight and take on Anthony Joshua – but he isn’t looking beyond next opponent Tony Bellew at this stage.

The Ukrainian is the undisputed champion of the cruiserweight division and will put his IBF, WBO, WBA and WBC titles on the line when he faces Bellew at the Manchester Area in November.

The showdown with the Briton is expected to be Usyk’s last bout at cruiserweight before he steps up to heavyweight, in a bid to join the likes of Evander Holyfield and David Haye in moving up to claim heavyweight titles.

Joshua would be an obvious target for the 31-year-old southpaw and Usyk has indicated he would like to face the WBA, WBO and IBF heavyweight champion at some stage but he is keeping his sights on Bellew for the time being. “Do you know I cannot tell you in advance before this fight happens,” Usyk told Sky Sports.

“When promoters start negotiations between Usyk and Joshua, then I will get ready for that.” Joshua is unbeaten in 22 fights so far, with 21 wins coming inside the distance.

Usyk says he has followed the 29-year-old’s career closely, and suggested he would be confident of claiming a victory should their paths cross.
He said: “I watched all his fights in London at the Olympic Games and of course his professional fights as well.

I am interested in him, I mean it is interesting to watch his fights.” On Joshua’s display in his win over Alexander Povetkin last time out, he added: