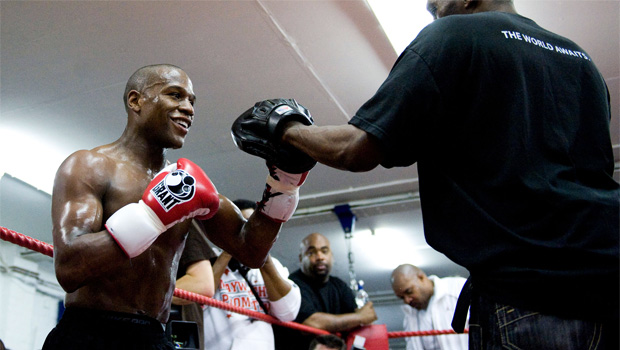 Floyd Mayweather Jr has once again admitted that he would like to fight in England after he defeats Saul Alvarez on September 14.

The pound-for-pound king will defend his 44-fight unbeaten record when he takes on the Mexican and another win will see his stock rise once more in the sport.

Mayweather has previously admitted he has plans to fight in England and has new ties with the UK after signing Ashley Theophane to his Mayweather Promotions label.

Welterweight star Amir Khan will be one possible opponent should the fight go ahead but he will need to get past Devon Alexander last this year.

Speaking to the Sky Sports Toe 2 Toe podcast, Mayweather said: “Anything is possible, we just signed a fighter from London. He’s unbelievable.

“He’s been helping me, actually we’ve been boxing a little bit. He’s tough, he’s a tough competitor. Mayweather Promotions is looking to do a show in London after September 14 so we are going to take our roster over to London and set up shop.”

Alvarez comes into the fight as the underdog but pundits are suggesting that Mayweather will face his toughest test for the first time in a number of years, but the 36-year-old has denied that Alvarez will bring in any new problems he has yet to face in his career.

“I can’t say as of right now, but you know I’m never worried about no fighter,” he said.

“We’re yet to see that so we’ll have to see how the fight plays out on September 14.”