Boxing: Juan Manuel Marquez looking to go out on a high

Posted by Vincent Henderson on September 26, 2013 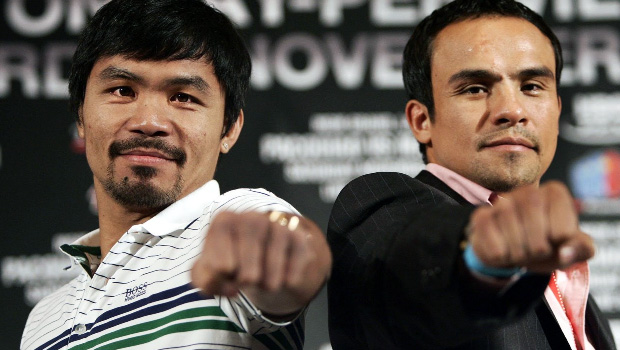 Juan Manuel Marquez says his rivalry with Manny Pacquiao is over and has revealed he may retire from boxing after his upcoming title fight with Timothy Bradley.

The Mexican fighter will square off against the unbeaten WBO welterweight champion Bradley on October 12 in his first fight since beating Pacquiao last year.

After failing to beat the Philippine superstar in their previous three encounters the 40-year-old was able to gain revenge with a sixth-round knockout of his adversary.

There had been talk of the two stepping into the ring for a fifth encounter but Marquez has said that won’t happen as he looks to move on.

“I want to give the fans something different than another Pacquiao fight. We fought four times and I believe the fans enjoyed all of them and we had a great rivalry but that is over now,” he told World Boxing News.

Marquez has now set his sights on becoming the first Mexican to win five titles in five weight classes as he gears up for his showdown with Bradley next month.

The American fighter, who has also beaten Pacquiao, is 30-0 in his professional career and has promised to retire Marquez in the 31st victory of his career.

Marquez says he is paying no attention to what Bradley has to say and while he admits retirement is a possibility, he claims he is totally focused on winning another world title.

“I won’t rule anything out right now. First things first, we have to see how I feel physically, which is a very important factor and then see what happens,” Marquez told Boxing Scene.

“Bradley can say whatever he wants, but [saying he will retire me] and doing it are two different things. Anything can happen in the ring. We will allow him to keep talking, but I will let my fists do the talking.”