Posted by Vincent Henderson on October 31, 2013 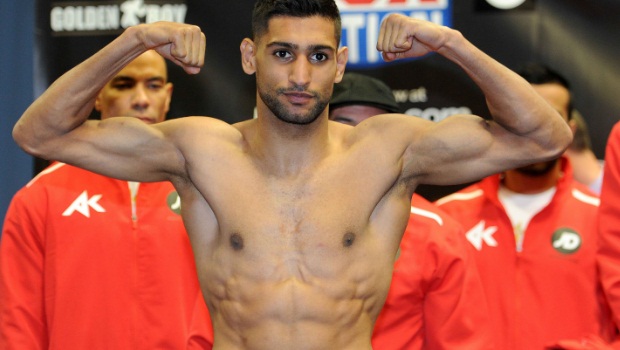 Amir Khan is confident that he will end Floyd Mayweather’s long unbeaten run by taking advantage of ‘his old legs’ if he is handed his ‘dream fight’ in 2014.

The 26-year-old Bolton fighter’s proposed meeting with former WBC and IBF light-welterweight champ Devon Alexander later this year will not happen and that has left a void in his calendar to fill.

As a result the speculation that Khan could enter into a money-spinning super-fight against 36-year-old five-division world champion, Mayweather, who has 45 professional wins under his belt, at some point next year.

A May date in Las Vegas has been mentioned, but Mayweather’s revelation that he would welcome a fight in the UK has also thrown up the possibility of a Wembley showdown.

Khan said: “There’s a lot of talk about the Mayweather fight happening, but at the moment, I’ve left it up to my promotional team, Golden Boy.

“Meeting Mayweather would be my dream fight. We are the superstars of boxing and, fingers crossed, we will meet.

“It would be an amazing fight. It’s a fight I have always wanted -because I want to fight the best.”

He added: “To fight Floyd Mayweather, you have to box him at his own game.

“You have to box him. You have to use all of your speed and good footwork to make those old legs move.