Posted by Vincent Henderson on November 19, 2018 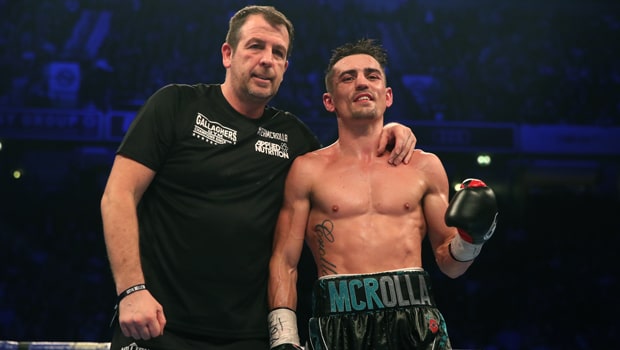 Trainer Joe Gallagher says Anthony Crolla fully deserves a fight against Vasyl Lomachenko for the WBA lightweight belt after battling his way back to form.

Crolla formerly held the WBA belt before suffering back-to-back defeats against Jorge Linares – both which were by unanimous decision – and the Manchester-born fighter has been hard pressed to get another shot at the belt.

The 32-year-old defeated Ricky Burns and Edson Ramirez before dispatching Daud Yordan last time out in a WBA final eliminator to secure a mandatory fight with champion Lomachenko.

Lomachenko puts his title on the line against WBO holder Jose Pedraza in a unification clash on December 8 and the Ukrainian is in great form ahead of the contest, having beaten Linares and Guillermo Rigondeaux in his last two fights.

Speaking about a potential clash between Crolla and the WBA champion, Gallagher believes the Englishman deserves the chance to be fighting for the belts.

“Lomachenko, whether the fight would happen here in the UK at The Manchester Arena, or whether we may have to go to Madison Square Garden, I think it’s a great opportunity for Anthony Crolla to challenge himself against one of the best in the world,” he told Sky Sports.

“Somebody has to fight Lomachenko, Lomachenko has to defend against somebody, and Anthony Crolla has done a fantastic job since losing to Linares to come back and put himself in the driving seat.

“He beat Ricky Burns, a three-weight world champion, he just beat the Mexican, and then he had a great win against No 2 in the WBA rankings, so no-one can say Anthony Crolla has been given this opportunity.”