Posted by Vincent Henderson on December 17, 2018 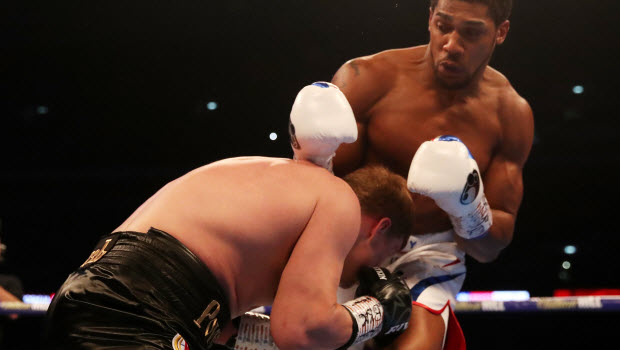 American heavyweight Jarrell Miller has urged Anthony Joshua to leave England for his next fight and take him on in New York in 2019.

The IBF, IBO, WBO and WBA ‘super’ champion has yet to fight outside the UK and he is set to fight at Wembley on April 13 next year. Joshua beat Alexander Povetkin to retain his titles earlier this year, but he has yet to confirm his next opponent after talks with WBC champion Deontay Wilder broke down.

Tyson Fury, Wilder, Dillian Whyte and Dereck Chisora are all pushing to fight the British star but Miller is determined to make his mark in the next 12 months.

Both Joshua and ‘Big Baby’ were at Madison Square Garden on Saturday as Saul ‘Canelo’ Alvarez beat Rocky Fielding and the Brooklyn native is determined to get AJ to fight in America.

“I’m looking forward to seeing him again and face-off with him,” said Miller. “It’s all fun, it’s not personal, only business. “AJ is a great champion, doing his thing outside and inside the ring, but sooner or later I’m going to punch him in the face.

“Anybody that has the belt, that’s how I feel. I feel like I can beat AJ any day, I know I can beat Deontay. “Madison Square Garden is the Mecca of boxing. I don’t care what anybody says.

“If AJ wants to come to America, this is the place to do it, and I’m the man to punch him in the face.” The winner of Whyte v Chisora will be the favourite to take on AJ, with the latter a 3.50 outsider for that bout.