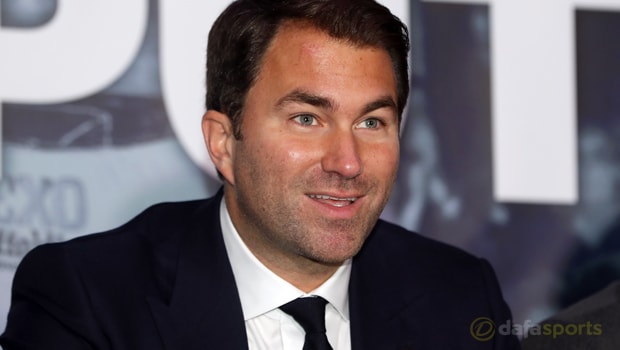 Promoter Eddie Hearn has confirmed that Kal Yafai could take on boxing superstar Roman Gonzalez in his next fight after beating David Carmona on Saturday night.

The Birmingham fighter defended his WBA world super-flyweight belt in style in California as he made his American debut.

Yafai knocked the Mexican down on four occasions and had a point deducted before Carmona refused to come out for the eighth round. After a brutal win, Yafai is now dreaming of a potential unification clash against IBF champion Sherwin Ancajas.

Ancajas was on the same bill and won via a points decision but Hearn admits Gonzalez is also on the cards.

Gonzalez is looking to return to the ring after back-to-back knockout defeats to WBC champion Srisaket Sor Rungvisai and Hearn insists the fight would be an exciting one in the USA.

He told Sky Sports: “Kal made a big statement over here and I can see him staying in the States for his next fight.

“He is ready for the challenge of unification but we also really like the Chocolatito fight and have already opened talks with his team.

“There’s exciting times ahead Kal, for sure.”

Yafai has echoed Hearn’s comments and says a fight with Gonzalez is something he wants in the next few months.

He added: “What a way to start with my American debut, putting on a show like that. I really enjoyed it, the first time in the United States and I can’t wait to come back.

“I’ll fight anyone. I’ll sit down with my team, sit down with promoter Eddie Hearn and we’ll see what’s out there and earn with Hearn, baby!”