Posted by Vincent Henderson on September 12, 2017 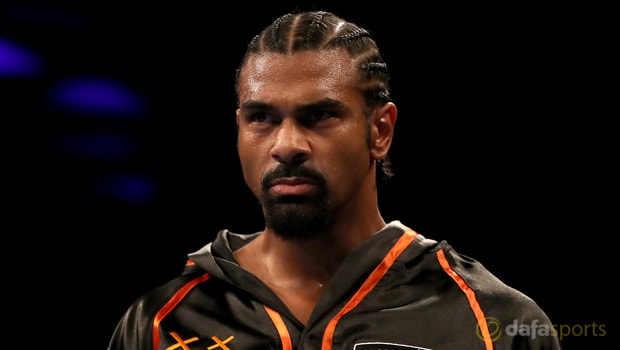 David Haye believes he has the capabilities to beat Anthony Joshua in the future as he continues his recovery from an Achilles injury.

The 36-year-old heavyweight has been sidelined with the problem since his defeat to Tony Bellew in March but is earmarking a return as early as December.

“I am looking forward to getting back in the ring to show the world what I can do and that I can still produce the goods,” Haye told Sky Sports.

“I will be back fighting in December. My foot is nice and healed and I’ve had reconstructive surgery on my Achilles tendon.”

One man on Haye’s radar – eventually – is reigning WBA, IBF and IBO champion Joshua, a man he has the utmost respect for, although he is confident he is more than capable of beating the 27-year-old.

“AJ is not on my radar right now but once I prove myself in December and am firing on all cylinders, I want the Joshua fight,” Haye added.

“If I get in the ring with him, I will find a way to beat that giant.

He is 10 years younger, three inches taller and three stone bigger, and I love and relish that kind of challenge.”

Joshua is currently preparing to put his belts on the line against Kubrat Pulev at the Millennium Stadium on October 28, a fight Haye expects the heavyweight champion to win in convincing fashion.

He added: “I do believe though that against Pulev, you will get a world-class performance from the heavyweight champion of the world.