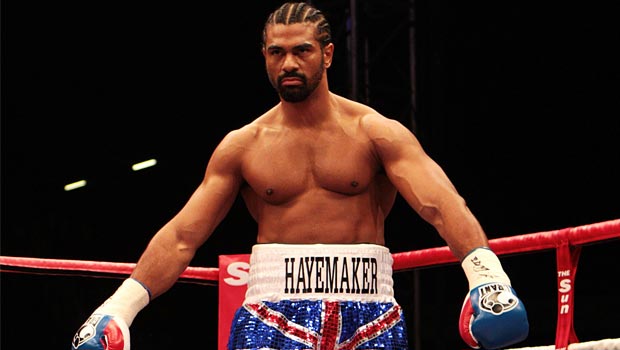 David Haye says he hasn’t totally ruled out a return to boxing after making rapid progress in his recovery from major shoulder surgery.

The 33-year-old, who had already hung up his gloves once previously in his career, admitted at the time it was tough to see how he would fight again given the severity of the injury.

However, less than six months since going under the knife Haye says his rehab work is going well and he is close to being able to throw a punch again.

‘The Hayemaker’ says he hopes to start work with trainer Adam Booth very soon and believes it could be possible for him to fight again in future.

He said: “No decisions have been made with regards my future as a professional boxer.

“But I’m in the gym every day, religiously doing the programme set out by my physio. I’ve yet to work on the pads with Adam Booth or throw any ‘Hayemakers’, but I don’t feel a million miles away!

“Since the operation, it’s taken three solid months before I was able to actually use my shoulder for everyday things like brushing teeth and picking things up.

“I’ve had now around five months of rehabilitation, and the effects of such a program means, I have full range of movement, and there are not many everyday things I can’t do perfectly.

“Obviously punching is not a ‘everyday thing’ but I’m not far away from doing some very light shadow boxing to test it ever so gently.”

Haye will hope that if he can return to boxing he might get the chance to fight for a world title again, the British heavyweight having been on the verge of a shot at a belt before his injury.

Haye was scheduled to fight Tyson Fury in what was seen as a title eliminator before picking up the injury.