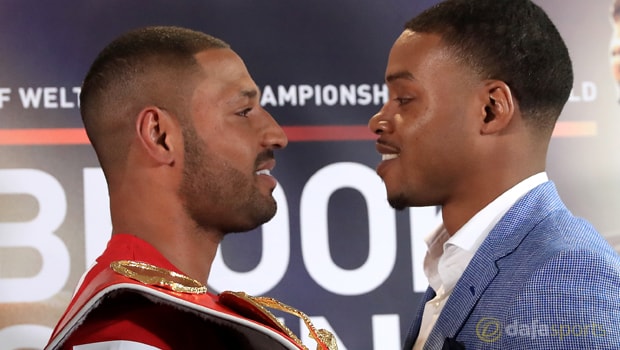 Danny Garcia believes Errol Spence Jr could have the beating of Kell Brook on Saturday if he can handle the pressure.

The pair meet at Sheffield’s Bramall Lane for Brook’s IBF welterweight title in what will be the hometown favourite’s first fight since losing to Gennady Golovkin last year.

However, that bout came at middleweight and he will be hoping the drop back down to his preferred division will prove he is still a force to be reckoned with.

Spence arrives in England boasting an unbeaten record from his 21 professional fights and has appeared bullish about his chance of success, having studied his opponent’s past performances.

A number of his fellow Americans have given him their backing, with Floyd Mayweather, Sugar Ray Leonard, Keith Thurman and Shawn Porter all talking up his hopes.

Garcia has now added his name to that list, insisting that although he is expecting a close fight, he believes the result will hinge on whether or not Spence will be able to handle the pressure of his first world title bout.

“I think the person with the better game plan is going to win. But it is a lot of pressure to go into someone’s backyard like that.

“Spence has never faced a fighter in his prime before, like Brook.

It is definitely a test for him and a big step up in competition. If he is ready, he can do it. He just has to go in there and stay focused.”