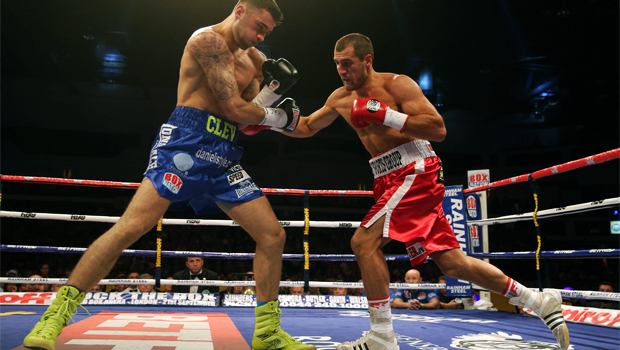 The Russian entered the match as a marginal favourite with an impressive record of 22 fights, 21 wins with 18 by KO inside the opening three rounds.

However, Cleverly was a man full of confidence as he looked to defend his title for a sixth successive time.

From the outset it was clear that the 30-year-old had plenty of power in his right hand and in the opening round he was keen to try and find some range on the man from Caerphilly.

The defending champion demonstrated some good footwork in the first round and started to grow in confidence when he opened up a cut above the right eye of his opponent.

Kovalev did not allow that to hinder his performance as he continued to utilise his jab and land some powerful rights.

In the third round Cleverly hit the canvas for the first time in his professional career before beating the count only to be sent to the ground for a second time.

Referee Terry O’Connor was on the verge of stepping in a stopping the fight as the bell rang to end the third round, handing the home fighter a chance to recover.

It was all over 29 seconds in to the fourth when Kovalev continued to throw his heavy right hand forcing O’Connor to step in and end the bout.

Kovalev said: “I came here and nobody believed I would beat their champion, but everywhere else in the world they knew already how good I was.

“I knew he couldn’t take my power. The fact the fight was televised on HBO in the United States was very important for me.”