Posted by Vincent Henderson on November 15, 2018 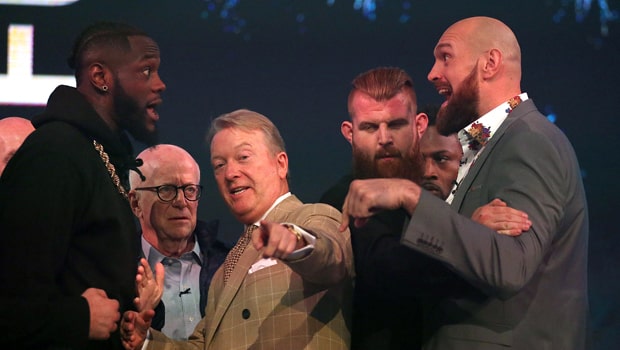 Tyson Fury feels his upcoming world heavyweight title battle with Deontay Wilder could be the toughest fight of his career so far.

Fury claimed the WBO, WBA, IBF and IBO crowns by downing Wladimir Klitschko in Germany three years ago but after a period of inactivity, during which time he has faced just two opponents, he no longer holds any of the heavyweight titles.

The 30-year-old produced a boxing masterclass to see off Klitschko and claim a points win.

The British star feels WBC champion Wilder provides a different challenge, however, and he believes he could be drawn into a battle by the unbeaten American.

Wilder has won 39 of his 40 fights inside the distance and Fury, who has fought just twice since his famous win in Dusseldorf, is well aware his opponent possesses incredible power.

“Wilder is someone with dynamite power,” said Fury.

“I don’t know about me being clever, but it’s going to be a heavyweight title fight and we are going to have to start hitting each other.

“It is true that styles make fights and that is what will make this an interesting clash. But we will be having a go at each other and I am hoping it is going to be the toughest fight of my life.

“We can both knock each other out, but we also have to be fit enough to go 12 rounds.

That is what I am preparing to do. But it will be a fight, because that is what heavyweights do. It will become about having a go. We are unbeaten giants with a point to prove.

“I won in Germany against Klitschko and that is where I am happy to be now – a road warrior.”