Posted by Vincent Henderson on October 30, 2017 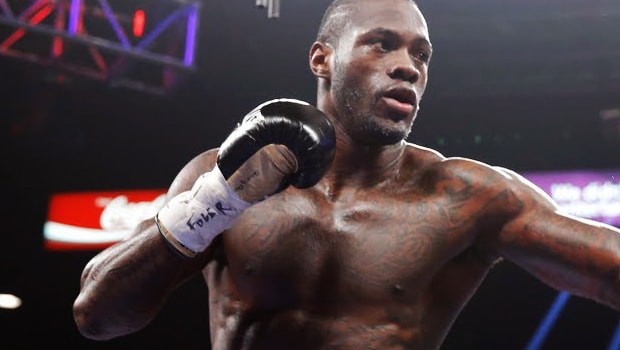 WBC heavyweight champion Deontay Wilder has “declared war” on WBA and IBF champion Anthony Joshua and insists he is also ready to take on Dillian Whyte.

The American is set to defend his title for the sixth time on Saturday when he takes on Canadian Bermane Stiverne at the Barclays Center in New York.

The undefeated 32-year-old has been accused of dodging the “big fights” since winning the title from Stiverne in January 2015.

However, he now appears to have been backed into a corner and looks set to take on Joshua at some point in 2018.

The Brit has quickly made his way through the heavyweight division and he took his record to 20-0 over the weekend after stopping Carlos Takam in the 10th round.

Joshua has made it clear for some time that he wants to unify the division and Wilder is now firmly in his sights, along with WBO champion Joseph Parker.

Promoter Eddie Hearn confirmed Joshua wants to face Wilder, Parker and Tyson Fury in 2018 in what looks likely to be a blockbuster year for heavyweight boxing.

Wilder has now had his say on a potential showdown with Joshua, while he also insists he would knockout Whyte, who won the WBC ‘silver’ belt on Saturday.

“You want Whyte and I want Joshua,” said Wilder.

“Put them in a package and let me fight. “I will knock out Whyte easy. I could do it with one hand tied behind my back.

“Kings don’t chase other kings. I got a kingdom and I brought all my king’s men and all the king’s horses and now I’m knocking on your kingdom doors.

“I declare war. I am declaring war upon AJ. I will not chase him. We are going to lure you in, you can only run for so long and so far.”