Posted by Vincent Henderson on April 1, 2018 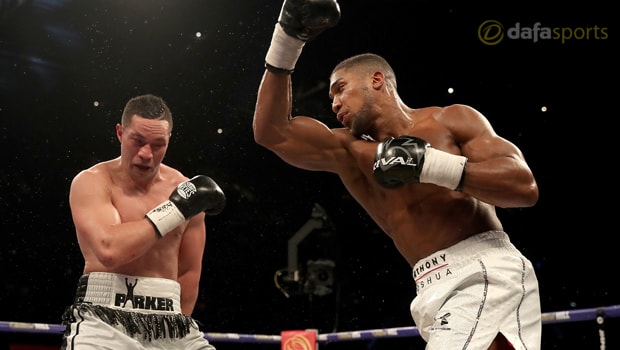 Anthony Joshua has now set his sights on Deontay Wilder after claiming a unanimous decision victory over Joseph Parker in their unification bout on Saturday.

Joshua secured his 21st professional victory from 21 bouts after controlling much of the fight against Parker and he has now added the WBO heavyweight title to the WBA (Super), IBF, and IBO belts that he already held.

The 28-year-old wasn’t at his scintillating best against the New Zealander and it is the first time that he has been taken the full 12 rounds during his professional career.

However, the Brit now just needs to land the WBC title to become the undisputed heavyweight champion and he confirmed that he is looking to take on Wilder, who is the current holder of that belt, soon.

He told Sky Sports Box Office: “I take these chances. You know the old saying, ‘No risk, no reward.’ We’ll see what happens, late 2018.”

Joshua is certainly confident he would have the tools to beat Wilder, revealing that he would be looking to ‘spark’ the American out.

He added: “Wilder, or [Tyson] Fury. Either one. What would I have to do to beat Wilder? Get him in the ring and I knock him spark out.”

Wilde, who was not at Saturday’s fight at the Principality Stadium, has since confirmed that he would be interested in fighting Joshua, while he also had a dig at the Brit’s performance against Parker.

“What a robbery, wow. Joseph Parker great job bro, oh my God don’t apologise you did nothing wrong, you’re a true champion. Anthony Joshua I accept 100%,” Wilder posted on Instagram.