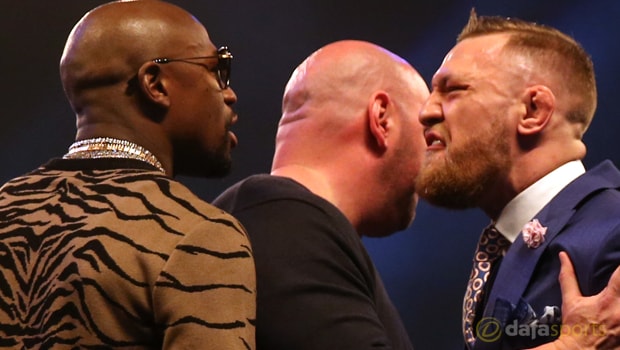 Two-weight world champion Andre Ward believes Floyd Mayweather will prove too good for Conor McGregor in next weekend’s super-fight and is predicting a knockout victory.

The undefeated American is set to return to the ring for first time since he beat compatriot Andre Berto at the MGM Grand in Las Vegas in September 2015.

Mayweather has decided to come out of retirement to take on McGregor and after plenty of verbals they will finally go toe-to-toe at the T-Mobile Arena in Las Vegas on Saturday.

McGregor believes his unorthodox style of movement backed up with a powerful left hook will prove too much for Mayweather to deal with as the Irishman looks to put a first defeat on the man widely regarded as one of the greatest-ever boxers.

However, Ward, who currently holds the IBF, WBA and WBO light-heavyweight titles, expects the UFC champion will tire quickly and allow Mayweather to take control of the bout.

Ward said: “I think McGregor will be wild for the first three rounds, but when he starts to tire, Floyd will take over and we could see a big knockout.”

Lenox Lewis is the latest big name to criticise the meeting between Mayweather and McGregor but Ward feels it is a good thing for the sport.

He added:”Some people have spoken out against it, but I think it’s good, we’re talking about it and so is everybody else.

“Even the mainstream media want to know, so I don’t think it’s as bad as everybody is making out.

“Floyd Mayweather has put on shows for the best part of two decades, so he deserves to do whatever he wants and this isn’t a sideshow, it’s a massive event.”

Mayweather is priced at 1.29 to extend his perfect record, while McGregor can be backed at 4.33 and the draw is available at 41.00.