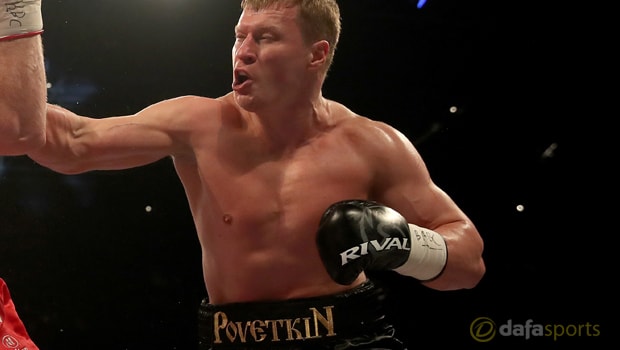 Alexander Povetkin’s promoter Andrey Ryabinskiy insists they expect Anthony Joshua to comply with the rules and agree a fight with the Russian this year.

Povetkin is the mandatory challenger for Joshua’s WBA ‘super’ heavyweight title and the governing body has set a date of May 6 for the two camps to agree a fight.

He warmed up for the potential fight with a knockout win over David Price on March 31 – on the same card as Joshua, as he beat Joseph Parker to retain his IBF, WBA, IBO belts as well as win the WBO strap.

Joshua’s promoter Eddie Hearn is in America this week to try and finalise a bout with WBC champion Deontay Wilder.

However, Ryabinskiy is expecting his client to be next in line as he tries to become the first fighter to beat the British star.

He told Sky Sports: “I believe that Joshua will follow and cooperate with the rules of the sanctioning bodies for the titles that he holds.

“We are happy to make the fight in England as both fighters have a lot of fans in England, there are many Russians that live in England and many who will come to England for the fight.

“Yes, of course, it is possible [to fight Joshua in Russia]. [The Luzhniki Stadium] has been recently renovated, it’s a legendary stadium, it has the capacity for a fight of this magnitude.

[Joshua’s promoter] Eddie Hearn is a very respectable promoter, we consider him our partner, and we hope that we can have a pleasant and efficient negotiations process.”