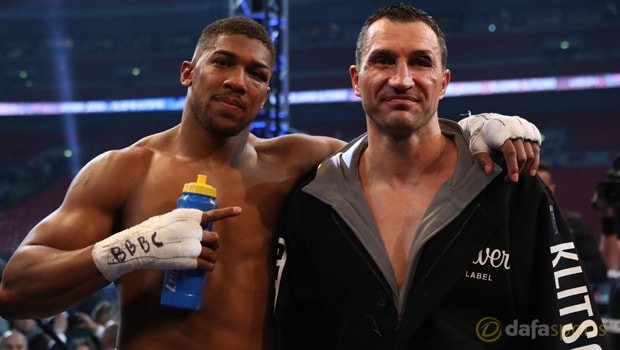 WBA, IBO and IBF world heavyweight champion Anthony Joshua is confident that Wladimir Klitschko will sign up for a rematch if they can agree a deal in Las Vegas.

The two giants of the heavyweight scene produced a thrilling fight back in April at Wembley, with Joshua coming out on top.

He had to climb off the canvas to do so but he eventually stopped his Ukrainian opponent in the 11th round.

The pair have continued to discuss a potential rematch this year, although Joshua also has the opportunity to face mandatory challenger Kubrat Pulev.

Klitschko has still to make his decision on his future after the stoppage defeat to the Briton but Joshua believes the former undisputed champion will return if they can secure a Vegas date.

Joshua told Sky Sports: “The ball is in Klitschko’s court. “I am going to continue my career.

It is up to him whether he wants to have a rematch or whether he says,’you know what, that’s enough’.

“He gained a lot of admiration and respect (at Wembley), even though he lost. Vegas, it is the mecca of boxing and this is an opportunity.

“People wouldn’t mind travelling and it is a nice big hurrah for himself. He has achieved so much, does he have the motivation? “I think Vegas will get his blood boiling again.”

Another victory later this year could push Joshua closer to a unification fight with WBC champion Deontay Wilder, while WBO champion Joseph Parker is also an option.

An all British clash with Tyson Fury is still a possibility but the former undisputed star has yet to receive his licence from the British Boxing Board of Control.