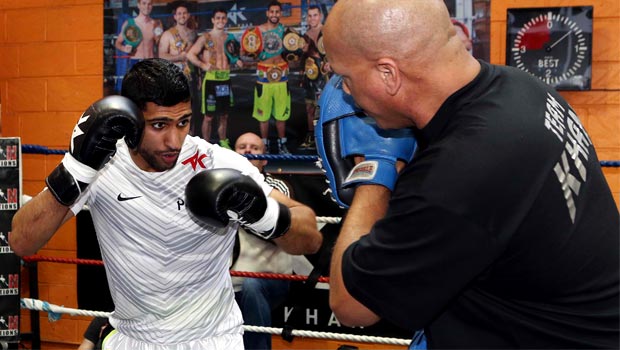 Amir Khan has confirmed that he has teamed up with boxing adviser Al Haymon, who could increase his chances of fighting Floyd Mayweather Jr in the future.

Haymon has represented a host of the sport’s biggest names, including Mayweather, and he is regarded as one of the most influential men in boxing.

He has links with many American television channels and promoters and this could help land Khan a huge fight down the line.

Khan could take on Mayweather, but he also has domestic options with Kell Brook desperate to face the Olympic silver medallist.

Khan has now joined that long list of stars as he tries to earn some big fights after a disappointing few years in and out of the ring.

The Bolton-born star was hoping to face Mayweather in May but the pound-for-pound king chose to fight Maidana instead.

Khan has been without a manager since he left Asif Vali in 2013, but Haymon will be in his corner for his next bout.

Khan will take on Luis Collazo on the Mayweather v Maidana undercard and he admits he is delighted to link up with Haymon.

Speaking about the partnership, he said: “I’m looking forward to building a successful relationship.

“I am very happy to have signed with Al Haymon, who has not only shown that he is a very astute businessman, but is extremely knowledgeable of the fight game and always has his fighters’ best interests at heart.”