Posted by Marlon William on February 5, 2018 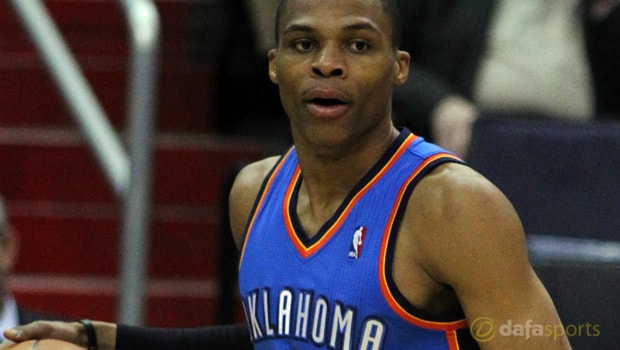 Russell Westbrook has revealed he enjoys the challenge of adversity after Oklahoma City Thunder slumped to their fourth straight loss against the LA Lakers on Sunday.

The 108-104 defeat at the Chesapeake Energy Arena leaves the Thunder fifth in the Western Conference standings and they are now looking over their shoulder as it begins to tighten up in the race for the playoff positions.

Point guard Westbrook finished as Oklahoma’s top points scorer during their most recent defeat and he remains unconcerned by their recent dip in form, as he would instead prefer to embrace the adversity they are currently facing. “It’s fun, man.

Adversity is great,” Westbrook was quoted as saying on ESPN.

“Me personally, I love adversity. It gives you an opportunity to bring your teammates together, bring everybody together and look forward to positive things.”

The 2017 MVP is certainly confident Oklahoma have enough character within their ranks to bounce back from their recent run of poor form, starting when they take on Conference leaders Golden State Warriors at the Oracle Arena on Tuesday.

“Throughout the season, there’s going to be a lot of ups and downs, but we never flinch,” the 29-year-old added.

“That’s one thing about this organization, about our team: We never flinch based on what’s going on.
We always stay together.”

Billy Donovan’s side will certainly have to be at their very best if they are to beat the reigning NBA Champions, who will also come into the contest looking to return to winning ways following their defeat to the Denver Nuggets last time out.