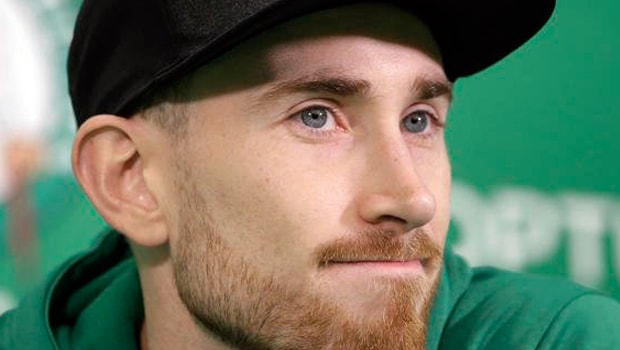 Gordon Hayward remains hopeful that he can return to action with the Boston Celtics before the end of the NBA season.

The small forward only joined the Celtics from Utah Jazz during the off-season, but he suffered a horrific dislocated ankle and fractured tibia just five minutes into his debut against Cleveland Cavaliers in October – an injury that was expected to keep him out for the entire campaign.

Many people thought the 2017 all-star’s injury would scupper the Celtics NBA Championship hopes, but they have instead rallied in his absence and currently sit top of the Eastern Conference standings with a record of 23-5 for the season.

The likes of Kyrie Irving and Al Horford have stepped up to the plate in Hayward’s absence, but the 27-year-old has now revealed he could still return to the team before the season reaches a conclusion.

“It’s definitely in the back of my mind,” Hayward told the Boston Globe.

“I’m definitely pushing to get back as fast as I can, while making sure that I still have a lot of good years of basketball in me.”

Despite his desire to get back on the court, Hayward has also urged some caution, as he will only resume playing once he is 100 per cent ready.

Boston will be hoping to maintain their impressive form in Hayward’s continued absence and they are priced at 3.40 to claim the Eastern Conference title, while they are available at 10.00 to secure overall NBA Championship glory for the first time since 2008.