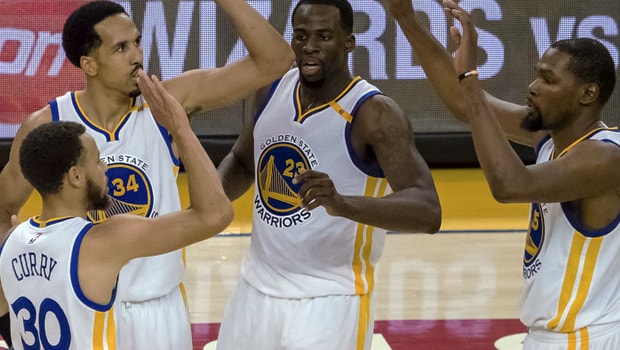 Steph Curry says Golden State must learn the lessons of Game 1 after producing a miraculous comeback to win their opening match against San Antonio.

The pair clashed in the opening match of the Western Conference Finals at the Oracle Arena on Sunday, and, following an exceptional season to date, it appeared at one stage like the Warriors’ campaign had hit the skids.

In fact, at 25 points down in the second quarter, they almost looked dead and buried in the match but once again the talent of Curry and Kevin Durant saw them through to a narrow 113-111 win.

The point guard chipped in with 40 of his team’s points, with Durant adding 34 but their result was not without a stroke of luck, as Steve Kerr’s men only truly excelled following the departure of the Spurs’ defensive lynchpin Kawai Leonard through injury in the third quarter.

Game 2 takes place in Oakland on Tuesday and the Warriors will be keen to restore some normality by justifying their status as the 1.36 favourites for the Championship.

Although he says the manner of Sunday’s victory will only boost morale within the camp, Curry admits they have work to do if they are to avoid being caught cold again.

“It’s the playoffs. You’ve got to expect everything,” Curry said. “I wouldn’t call it smooth sailing at all. We’ve actually had to execute and get to this point.

“They came out and challenged us heavy, put a nice little run together. It took us a minute to figure it out to get up to that game speed after this little break.

“It’s definitely a nice way to win Game 1. We’ve got to capitalize off that and start Game 2 a lot better.”