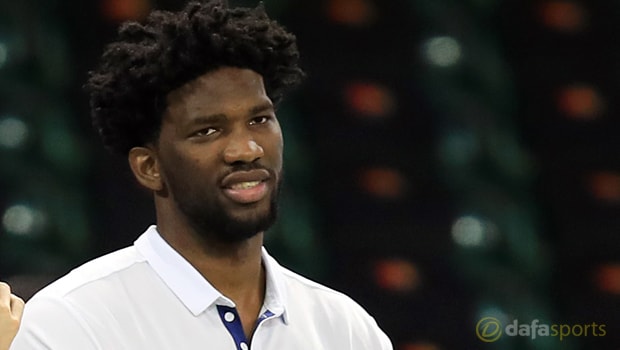 Joel Embiid is understood to be confident of recovering from surgery in time for the start of the new campaign with Philadelphia 76ers.

The Sixers finished second from bottom in the Eastern Conference last season and Embiid’s absence from February onwards saw their form nosedive, with Philly winning just 12 of 35 games in the final three months of the campaign.

Center Embiid underwent knee surgery in March and is now believed to be confident of returning for a training camp in October prior to the new season.

Despite the Sixers’ struggles last season, they do have a realistic chance of earning a playoff spot in the coming campaign as the team continues to mature.

Draft pick Markelle Fultz, 19, believes Philadelphia will grab a playoff place in his first season in the NBA.

We’ve got to just do whatever it takes to get there,” Fultz told CSNPhilly.

“That’s practicing even harder, that’s doing extra work in the gym by ourselves, I mean, we’re going to do whatever it takes.”

If the Sixers are to secure a post-season place they need Embiid fit, and at this stage it seems as if he may well be available for their season opener.

Philadelphia are 26.00 to win the Eastern Conference outright, Boston Celtics are 3.40 and Washington Wizards are 13.00.