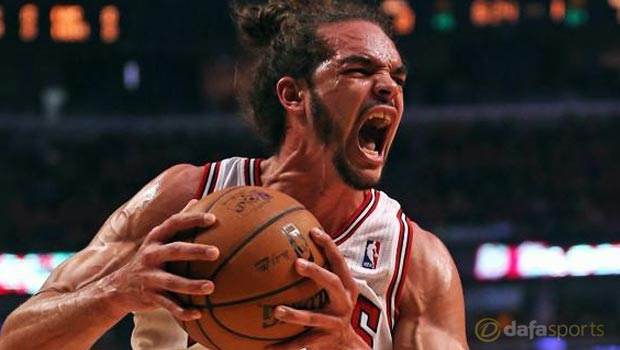 Chicago Bulls star Joakim Noah insists he is fully fit ahead of the new season after struggling in the previous campaign.

The two-time All Star won the NBA Defensive Player of the Year Award in 2014 but he followed that up with a lacklustre season, which was punctuated by a number of injury problems.

Noah has now stressed his fitness problems are behind him and the 30-year-old is ready to hit the ground running when the new campaign gets underway.

“I think it’s gonna be great. I’m really excited. I’m healthy,” Noah, speaking at his back-to-school giveaway through his Noah’s Arc Foundation, is quoted as saying by CSN Chicago.

“[I] haven’t felt healthy in a long time. I’m really excited for the coming year. It’s gonna be a lot of ball movement. I’m just really excited to come in and prove myself.

“I’m moving a lot better. I feel strong. I’m ready to rumble. I think last year was a tough year for us. Sometimes humbling is good.”

The Bulls fell at the second round of the play-offs last season as they were beaten 4-2 by the Cleveland Cavaliers, despite twice taking a series lead.

Despite the convincing manner of the series defeat Chicago have kept their squad intact, with rookie Bobby Portis the only new arrival.

However, there has been a change of coach as Tom Thibodeau has been replaced by Fred Hoiberg and Noah thinks they can now mount a Championship challenge this season.

He added: “I think continuity is gonna be great for us. Even though it’s the same group, it’s still gonna be change at the leadership role as far as coaching. So it’s gonna be very different. So having the same team brings stability as well.”

The Bulls are 15.00 to win the NBA Championship outright, while defending champions Golden State Warriors are 5.50 and the Cavs can be backed at 3.75.