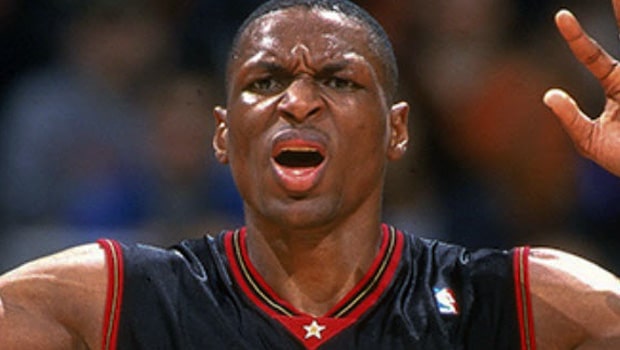 In 2001, Shaquille O’Neal and Kobe Bryant‘s Lakers beat Allen Iverson and Dikembe Mutombo’s 76ers 4-1. Many people have forgotten that the 76ers made headlines at the NBA trade deadline when they sent Theo Ratliff, Toni Kukoc, Nazr Mohammed and Pepe Sanchez to the Hawks for Mutombo and Roshown McLeod.

The trade was made because Ratliff broke his wrist and had it surgically repaired. This was supposed to keep him out for two to four weeks. He appeared on the Scoop B Radio Podcast with Brandon ‘Scoop B’ Robinson and recalled how he heard he got traded on TV and was very surprised. “I was like, ‘Oh s—t! I just got traded.’”

Ratliff then explained what he felt when he finally processed what just happened.

Definitely a tough move and all the guys I appreciated it because they took it hard and they didn’t want it to happen. You know so, all the guys spoke up and said they really didn’t want it to happen because they saw where we were going and we felt we would’ve been those teams that would’ve been playing for a championship. I mean, they ended up going but they felt that I probably wouldn’t be able to come back and heal within that time by having a screw in my wrist for the rest of the season by the time the playoffs hit.”

Larry Brown was the 76ers head coach that year and Ratliff explained that he always felt that Mutombo could defend Shaquille O’Neal with his height and his size and build. Ratliff added that his former head coach doesn’t stay in places for more than three years and that he wanted to give the 76ers their best chance to win.

Theo Ratliff, who averaged 12.4 points, 8.3 rebounds and 3.7 blocks in 36.0 minutes over 50 games with the 76ers that season, while making the only All-Star game appearance of his career, was asked what would have happened if he hadn’t gotten hurt

“I think we beat the Lakers in that same year,” Ratliff said.

“I had kind of figured out how not to just to play against Shaq, but realized my quickness and my athletic ability to put him in position that he doesn’t want to be in. Especially when I’m bringing him up in that pick-and-roll. He knew he didn’t want to have to guard that. That was big.

I knew once they had Dikembe, he’s not that athletic. He’s another anchor that’s going to sitting in that middle with another big so the lanes are not going to be as open as they were with the nucleus that we had where I could step outside and I could move around outside and do a bit more than he could to provide some open lanes them and also run the break and things of that nature.”