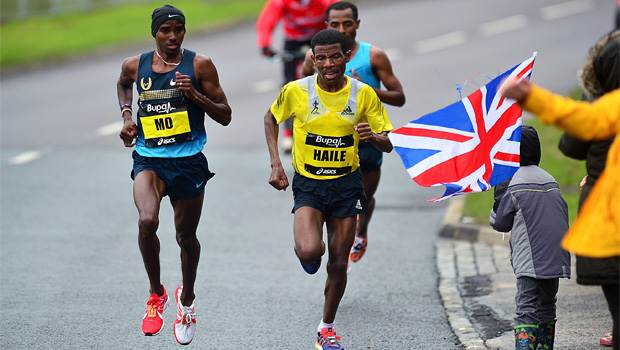 Farah was trailing the Ethiopian, who was running his first competitive half marathon, after he made the break with around a mile to go on the 13.1 mile course across Newcastle and South Shields.

But, despite closing in on Bekele in the final 400 metres, Farah could not dig out the extra needed to pass him before the line and finished a second behind the winner’s official time of one hour and nine seconds. Bekele’s fellow Ethiopian, Haile Gerselassie, was a distant third after falling behind.

Afterwards 30-year-old Farah said: “I’m disappointed but I was second to a great athlete.

“When Kenenisa went with a mile to go I thought the pace was ridiculous.

“I thought I could come back. It came to the last 200m, right to the line. It was a great race and a great finish.”

In the women’s race, this year’s London marathon winner and the reigning Olympic marathon silver medallist Priscah Jeptoo of Kenya won in a time of one hour five minutes and 40 seconds – just five seconds slower than the course record set by Britain’s Paula Radcliffe 10 years ago.