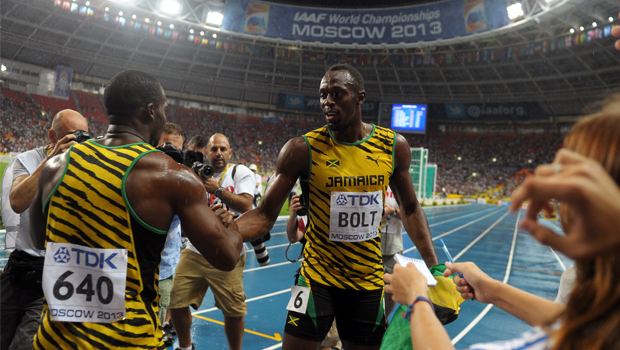 Usain Bolt claimed the 100m gold at the World Championships in Moscow and then set his sights on next year’s Commonwealth games in Glasgow.

The Jamaican clocked an impressive time of 9.77 secs in the Luzhniki Stadium, holding off the challenge of Justin Gatlin, who took silver in 9.85secs, while Bolt’s fellow countryman Nesta Carter won bronze in 9.95secs.

It was an impressive performance by Bolt, who continues to dominate the world of sprinting, and he has now admitted the Commonwealth Games at Hampden Park could be on the cards.

Bolt has yet to race in the Games after missing 2006 and 2010 through injury but, with there being no World Championships or Olympics in 2014, a trip to Glasgow and another title to his list of honours appeals.

“On ‘off-years’ I try not to stress myself too much but I’ve never been to the Commonwealths so that’s something I’m thinking about,” he said.

“It’s always something good to add to the resume. Next year I’ll have to train hard and push myself. I’ll be on the circuit trying to run fast times.”

The athletics take place from July 27 through August and the presence of Bolt for the 100m and 200m would be a huge boost for organisers, who will be hoping the fastest man in the world stays true to his word.

Meanwhile, the 26-year-old is showing no sign of taking his foot off the pedal and wants to go down in history as one of the greatest sportsmen ever.

“I am going to try continue winning championships. I want to be mentioned alongside greats like Pele, Maradona and Muhammad Ali,” he added.