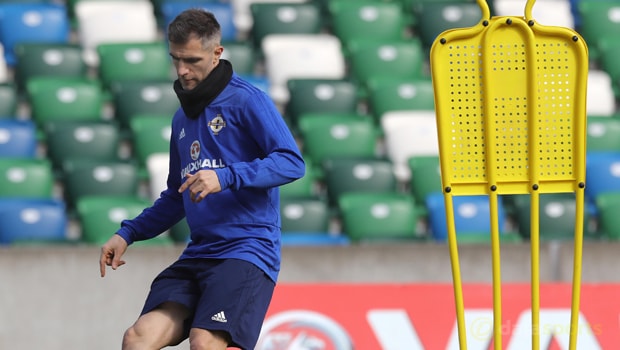 Hughes, Northern Ireland’s most capped defender ever, is expected to make his 112th appearance for his country in Sunday’s friendly against Costa Rica, leaving him just seven short of equalling Pat Jennings’ overall record.

Hughes has not made a decision on whether he wants to play on next season, though club side Hearts have expressed a willingness to offer him fresh terms should he decide to keep going.

O’Neill feels the central defender still has something to offer, for both club and country.

“I would like Aaron to play as long as possible – he’s so close to the record,” O’Neill said.

“He can still play, hold his own, I’ve watched him in the Scottish Premiership this year. Aaron has earned the right to make that decision.

“I think the second half of the season has been good for him. The problem Aaron had was the frustration of the injuries.

He was coming back, breaking down, he probably thought, ‘I’m not proving to be much value to the club’. That’s the type of guy Aaron is.

“I know they would be very keen for him to sign again at Hearts.”

Northern Ireland narrowly missed out on a place at the World Cup in Russia, losing a two-legged playoff to Switzerland by a single goal. O’Neill is hoping Sunday will not be Hughes’ final game for Northern Ireland.

“I genuinely really hope he does. If he made the decision to retire, I’d be disappointed because I want him in the squad but I also respect that what he’s given us has been phenomenal,” he added.