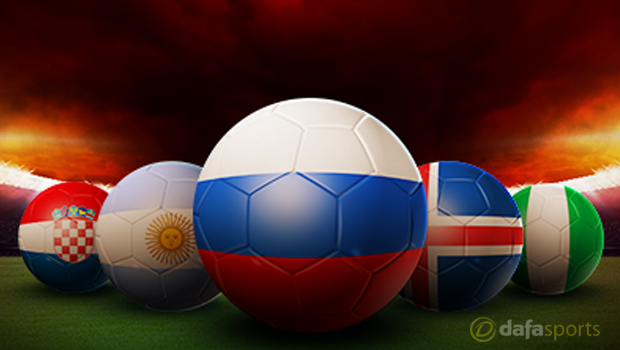 The excitement is almost at fever pitch as the 2018 World Cup in Russia looms large on the horizon. It is the biggest sporting event of the summer and will run from June 14 – July 15, when the final takes place in the Luzhniki Stadium, Moscow.

There are 64 exciting games to look forward to across 32 days! Match betting will be available on every World Cup 2018 game, including in-play betting, from the opening match between hosts Russia and Saudi Arabia on June 14, to the final in Moscow a month later.

As always, there are sure to shocks along the way and the group stages have the potential for some big ties of their own, even before we find out the 16 teams that will go through to the knockout rounds. On just the second day of World Cup 2018, Iberian neighbours Spain and Portugal lock horns in Sochi. Spain were world champions in 2010, and European kingpins in 2008 and 2012.

Portugal arrive here on the back of their maiden international tournament win at Euro 2016. An early setback could leave either heavyweight nation facing a scramble to make the knockout stages. On June 17, Brazil’s quest for a sixth World Cup crown begins against Switzerland, winners of nine of their ten games during qualifying.

Could they stun one of the tournament favourites? On June 28, the meeting of Belgium and England in Kaliningrad could be decisive in pursuit of qualification from Group. Red Devils boss Roberto Martinez has worked extensively in English football, where many of players are based, but will that aid them against Gareth Southgate’s emerging force.

Iceland, one of the World Cup debutants this summer, will be facing the might of 2014 finalists Argentina on June 16 in their first game. The tiny island caused a real stir at Euro 2016 in their major tournament bow, can they inflict pain on Lionel Messi and company in Moscow. The answers will all be revealed during your World Cup 2018 journey with Dafabet.