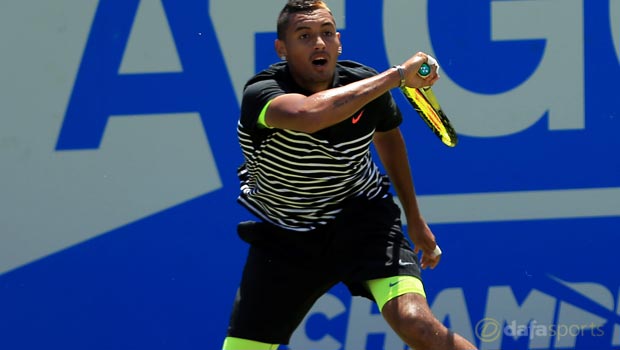 Nick Kyrgios has announced he has split from coach Todd Larkham with less than a week to go before the year’s third grand slam at Wimbledon gets underway.

The rising Australian star announced himself on the world stage at the All England Club last year when he defeated Rafael Nadal to reach the quarter-finals, before falling to Milos Raonic in four sets.

However, his preparations for this year’s tournament have been anything but ideal as he was forced to withdraw from Stuttgart because of an elbow injury before he lost his opening round at Queen’s in tame fashion to Stanislas Wawrinka and then had to pull out of the final grass-court tournament ahead of Wimbledon in Nottingham, citing illness.

Now he has confirmed that he has parted ways with long-time coach Larkham, but does believe that it is a decision made at the “right time”.

“I’ve worked with Todd on and off for many years and he has helped me immensely,” Kyrgios said on his website.

“I am very grateful for everything Todd has taught me and helped me with, especially during the last year.

“It’s never an easy decision to end a coaching relationship and to do so prior to the start of a grand slam is even more difficult,” Kyrgios continued.

“But I feel that this is the right decision for me at this time.”

Kyrgios is currently available at 41.00 to win Wimbledon this year, and although that maybe a bridge too far, he is optimistic he can play well in spite of his disrupted build-up, having reached the Australian Open quarter-finals on the back of just one ATP tournament in the previous four months.

“I know that I could do some good things there and I know that I don’t necessarily need too many matches before grand slams.”