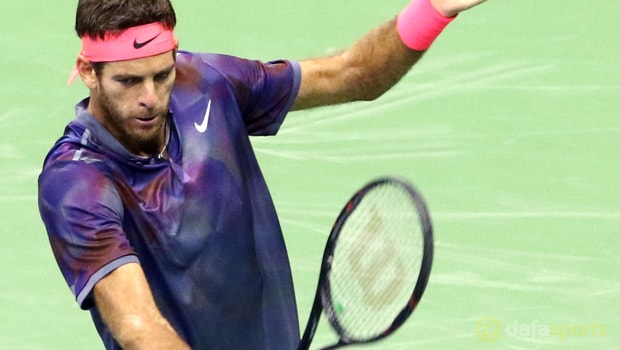 Argentina’s Juan Martin deal Potro admits he would love to feature at the ATP Finals in London after he reached the quarter-finals of the Paris Masters on Thursday.

The 29-year-old proved too strong for Robin Haase as he wrapped up a 7-5 6-4 victory in Bercy.

Del Potro has returned to Paris for the first time since 2013 and he was in sublime form as he converted all of his break point chances.

Haase had beaten Alexander Zverev earlier in the tournament but he was no match for Del Potro, who now takes on American John Isner on Friday.

Del Potro will need to secure a victory to book his place in London, with Pablo Carreno Busta currently in the eighth and final qualification spot at the moment.

After years of injuries, Del Potro admits playing in London was a distant dream but he is confident of featuring at the season-ending tournament.

He told reporters: “It’s going to be a good battle next round trying to qualify for London.

But anyways, I think I have two ways to take, one is London, one is my home and vacation.

“Both ways are great to me, but of course, I would love to reach London once again.

“I didn’t expect to get this close to qualifying for London. And everything is very amazing after all my problems, all my injuries… I love to surprise myself, and that’s what I’m doing now.”

Del Potro’s victory means Novak Djokovic is now out of the top 10 for the first time in a decade but both men will be confident of reaching the Australian Open in 2018.

Djokovic is priced at 4.50 to win the tournament, while Del Potro is available at odds of 23.00.