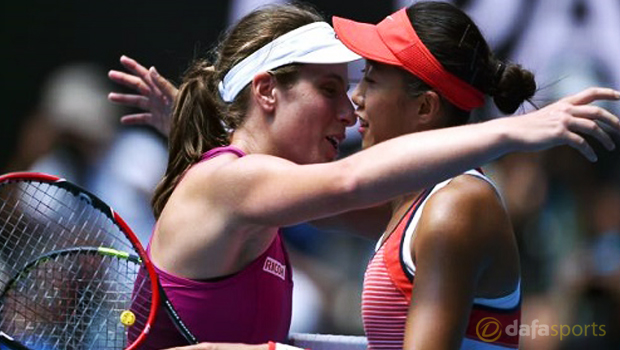 British number one Johanna Konta admits she is still in dreamland after beating China’s Zhang Shuai to move into the Australian Open semi-finals.

The 24-year-old has been the surprise package at Melbourne Park this year and she continued her stunning run with a 6-4 6-1 over the qualifier on Wednesday.

The Australian-born ace will now play German seventh seed Angelique Kerber in the last four with the winner set to square off against either Serena Williams or Agnieszka Radwanska in the final.

It has been a remarkable display by Konta but one that is perhaps not totally unexpected after she advanced to the last 16 of the 2015 US Open.

And, after her latest triumph Down Under, the Eastbourne resident could hardly contain her excitement.

“I’m just so happy that I’m enjoying what I’m doing,” she admitted. “That is me living my dream.”

Kerber upset the odds to beat Victoria Azarenka 6-3 7-5 on Rod Laver Arena, having lost all six of her previous encounters with the Belarusian, and she was equally as thrilled as Konta, saying “I can’t actually describe it in words.”

It is certainly not the semi-final that most pundits would have predicted, with Kerber the 1.30 favourite to progress and Konta on offer at 3.50 to become the first Brit since Virginia Wade in 1977 to reach a Grand Slam final.

The duo will square off on Thursday and Konta is clearly not done yet as she looks to fulfil a childhood dream.

“When I was a little girl, I dreamt of winning Grand Slams and being number one in the world,” she added. “That dream stays the same, I think, as long as you’re doing the career that you’re on.”