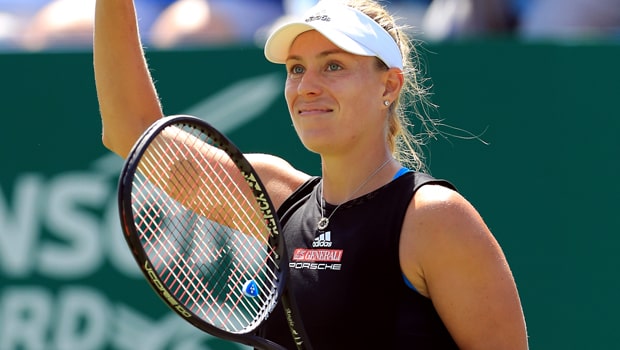 Angelique Kerber says she is happy to be in the quieter surroundings of Eastbourne as she prepares to defend her Wimbledon title.

The German continued her impressive form on a return to grass court tennis, easing through to the semi-finals of the Eastbourne International after beating Simona Halep in straight sets. Kerber won 6-4 6-3, as she continued her preparations for a return to the All England Club next week.

Kerber has a good record on grass, reaching the finals at Eastbourne twice, in 2012 and 2014, and she will bid for a third when she meets unseeded Tunisian Ons Jabeur in the semi-finals on Friday. She is 1.13 to win with Jabeur 6.00.

The German was always in control against Halep, attacking the Romanian’s serve and going a double-break up for a 4-1 lead in the first set. Halep did get one of the breaks back but Kerber served for the set and took it 6-4. Halep, French Open champion last year, demonstrated her resilience, keeping in the match in both sets but was ultimately left to concentrate on Wimbledon.

Kerber meanwhile stays in Eastbourne a little longer and she is enjoying the tournament and the relative quiet away from London. She said of the quarter-final victory: “It’s never easy to play Simona, but I played really well from the first point today, especially in important moments.

“I was hitting the ball good, really deep, and moving well. It was quite a good match from my side. “It’s better to be here (this week). It’s a little bit quieter than Wimbledon right now, so I prefer to stay here a little bit longer.”

Kerber is at 1.95 to win the Eastbourne International with Karolina Pliskova, in the other semi-final against Kiki Bertens, 3.00.