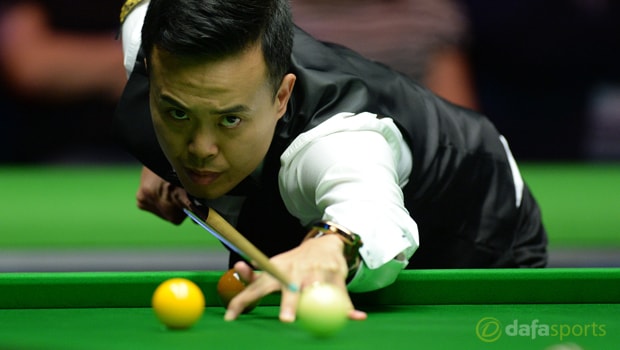 Marco Fu felt his win over John Higgins in the Scottish Open final in Glasgow might have been the best of his career to date.

The 38-year-old Hong Kong potter stunned Higgins as he recovered from 4-1 down to reel off eight frames on the spin and win 9-4.

Four-time world champion Higgins started in ominous form, compiling century breaks of 126, 101 and 100 to race into a 3-0 lead.

The Scot was looking to land his 29th ranking title, which would have taken him second in the all-time list behind compatriot Stephen Hendry’s tally of 36.

Having overturned a 5-1 deficit to beat Judd Trump 6-5 in their semi-final, it looked as though Higgins’ name was on the trophy when he dominated the early exchanges.

Fu got off the mark with a century (106) of his own and after Higgins had moved three clear again, he levelled 4-4 at the interval courtesy of breaks of 58 and 54.

The scoring was not so heavy in the evening session but Fu was able to dominate proceedings with runs of 89, 59, 59 and 60 to land his first ranking title in three years.

Fu was also a winner of the Grand Prix in Scotland back in 2007. Reflecting on the win over Higgins, Fu nominated it as a stand-out moment in his snooker career. “I just can’t believe I am the champion,” he said.

“In the first part of the season I was really struggling but I somehow found some form at the UK Championship [semi-finalist] and now I have won 15 out of 16 matches. It is probably the best win of my career.”

Fu can be backed at 21.00 to win next month’s Dafabet Masters in London while Higgins is 9.00 to claim the prestigious tournament for the third time in his career.